Developed by Seabourne Consulting, experts in Our Climate, Our Health

Our Climate, Our Health

This is the first of a four-part series on Community Commons highlighting the impact of climate change on human health, communities, and economies. The series is co-authored by Chris Paterson of Community Initiatives.

Most people are now familiar with the concept of “climate change” – the release of greenhouse gases (i.e., carbon and methane) into the atmosphere via the burning of fossil fuels resulting in significant changes to the global climate. Recent coverage has tended to focus on more visible manifestations; e.g., increase in surface temperatures and precipitation in the U.S., rising sea levels, flooding, drought and severe weather events.

Less visible and, until recently, less talked about are the risks posed to human health. Whereas a hurricane or flood can kill or injure people directly and destroy built structures, changes to the climate have more a subtle yet equally harmful consequences to our health and well-being. The safety of our food, the places we live, work, and play, the air we breathe, the water we drink, are all dependent on the climate and associated weather patterns.

Attention to the connection between human health and climate change is beginning to evolve. Both in the U.S. and globally, public health professionals and organizations have begun to focus their (and our) attention to this issue.

Noting that “too many people aren’t aware that climate change is really a threat to our health, our communities and our future,” the American Public Health Association has declared 2017 the Year of Climate Change and Health in an effort to raise awareness.

Speaking at a recent gathering of climate scientists and public health professionals, Dr. Howard Frumkin, of the University of Washington School of Public Health observed, “It’s very hard to quantify worldwide death rates from climate change. We can do it in relatively small ways – malaria, hunger, severe storms – but the really big killers are likely to be drop-offs in nutrition, infectious diseases that are a result of both spreading vectors and of poor nutrition, population dislocation and migration.”

Similarly, The Lancet Countdown – “an international, multidisciplinary research collaboration between academic institutions and practitioners across the world” – is embarking upon an effort to track and report on key indicators of the relationship between health and climate change in order to “engage with policy makers and the broader health community to better communicate the opportunities available in responding to climate change both for health and more broadly.”

And on March 15, 2017, a group of twelve medical societies announced the formation of The Medical Society Consortium on Climate and Health with the mission to “inform the public and policymakers about the harmful health effects of climate change on Americans, as well as about the immediate and long-term health benefits associated with decreasing greenhouse gas emissions (i.e., heat-trapping pollution) and other preventive and protective measures.”

Some of the more commonly explored linkages between climate change and human health include heat-related death and illness; changing patterns and prevalence of infectious disease; changes in air quality and impacts on chronic disease; and changes in food systems and nutrition. We introduce the first three of these topics below and will come back to the fourth in a future post.

According to NASA’s Goddard Institute for Space Studies, 9 of the warmest years on record have occurred since 2000, with 2016 being the warmest year to date. It is projected that temperatures around the globe and in the U.S. will continue to rise, with heat waves becoming more prolonged and intense.

One of the most startling impacts of rising temperatures was seen in Europe during the summer of 2003. June and July saw average temperatures increase 12-13 F° across Europe, with temperatures reaching nearly 104 F° in Madrid, Paris, and Geneva. The death toll was estimated at 70,000 during that summer. During intense heat waves like this, electric cables can melt and water pumps can fail. For homebound people like the disabled or elderly, it becomes a life and death situation. Of the 15,000 people that died in Paris during that summer, most were single, elderly women who lived in poorly ventilated apartments.

Heat waves are being seen (and felt) more frequently than before. As a result, heat-related morbidity and mortality are increasing as well. Dehydration, heat exhaustion and heat strokes will only become more frequent. It’s especially burdensome for those who earn their living working outdoors, people living in dense urban centers, in poorly ventilated housing, and for infants and the elderly who are more sensitive and less adaptable to climate variability. 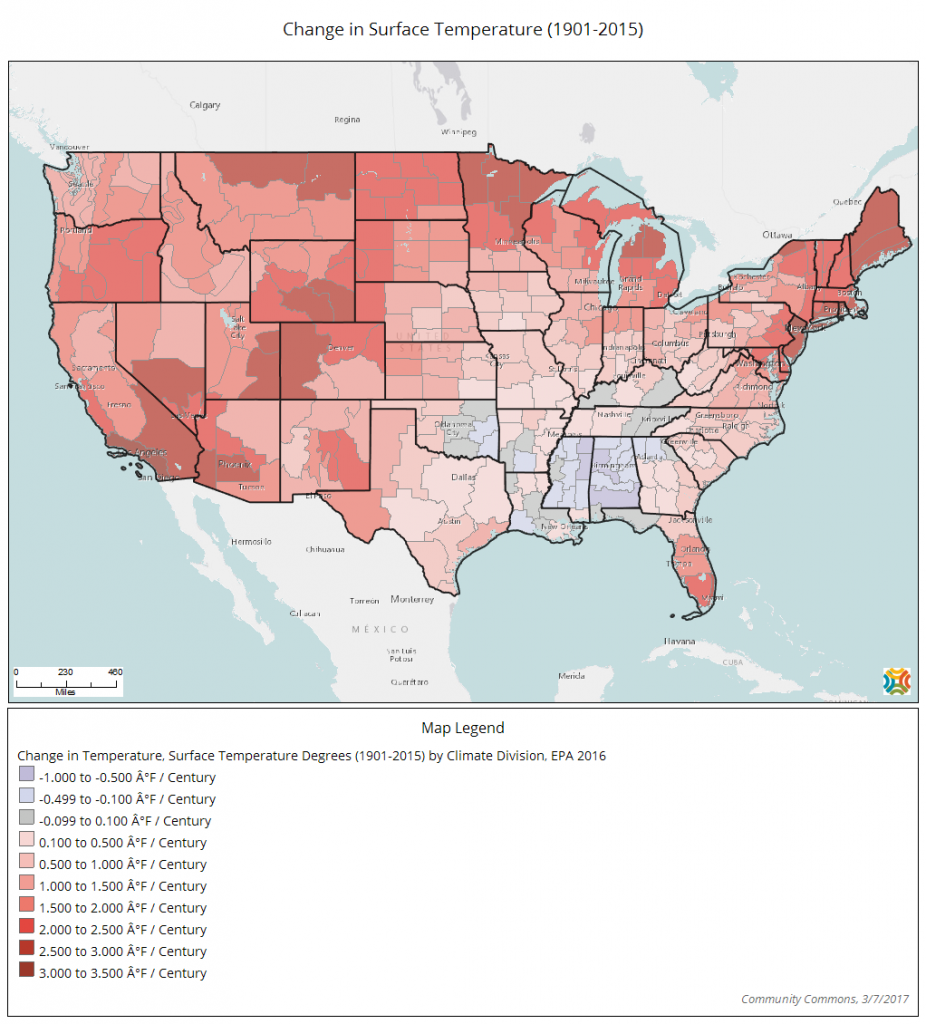 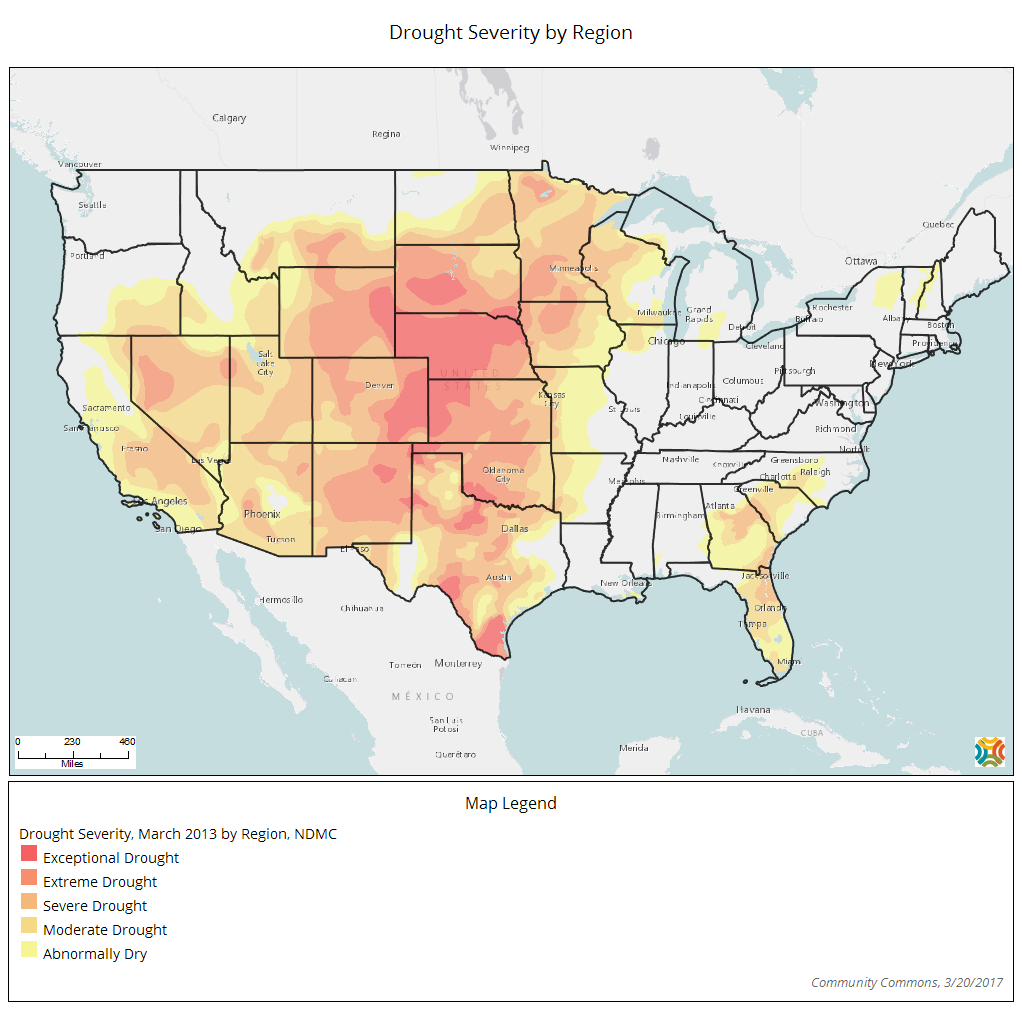 Infectious diseases are probably not top of mind when thinking about climate change. But they should be. Rising temperatures, rising sea levels, floods, and increased humidity are breeding grounds for food, water, and vector-borne pathogens.

Vector-borne diseases that are carried by mosquitoes or ticks, like malaria or Lyme disease, respectively, are generally found in warmer, more humid climates. However, with rising temperatures and warmer seasons, the distributions of these diseases are spreading. 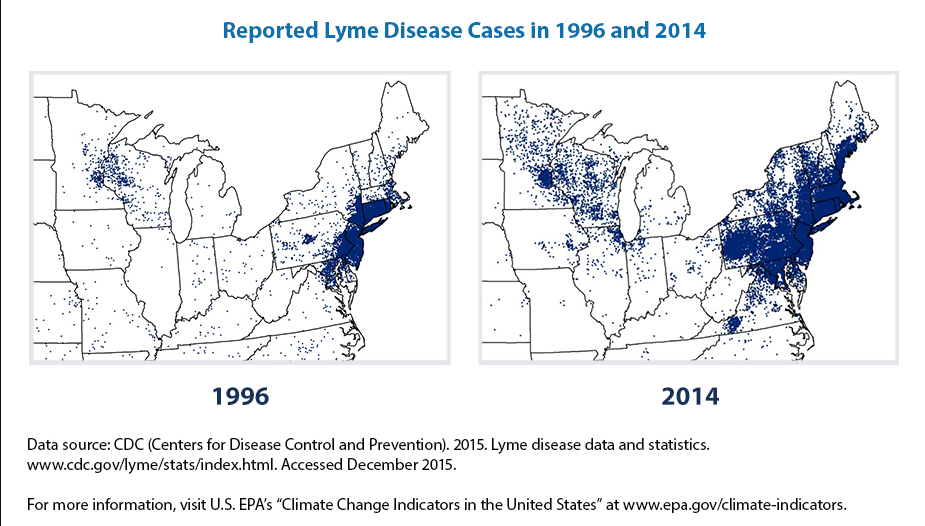 In fact, mosquitoes that carry malaria have recently been found around the U.S. – Mexico border.

Microorganisms and toxins cause water-borne disease like cholera, giardiasis, and other gastrointestinal illnesses. Increases in precipitation and flooding expose more people to these disease-causing bacteria. Specifically, flooding and storm water runoff is a problem for overburdened water treatment facilities and areas where people use surface water for consumption. Storm water runoff carries chemicals, dirt, and debris that can contaminate treated and untreated water supplies. Large cities like New York, Boston, and Philadelphia have combined sewer systems that treat storm water and wastewater. Frequent heavy rains can overload these combined systems and untreated water is at risk of being released into local water supplies.

If our water is exposed to the threat of environmental contaminants, then so is our food. Not only can contaminated water infect our food supply, increased temperatures and humidity can as well. Salmonella thrives in warmer environments and is easily spread from contaminated food to humans. 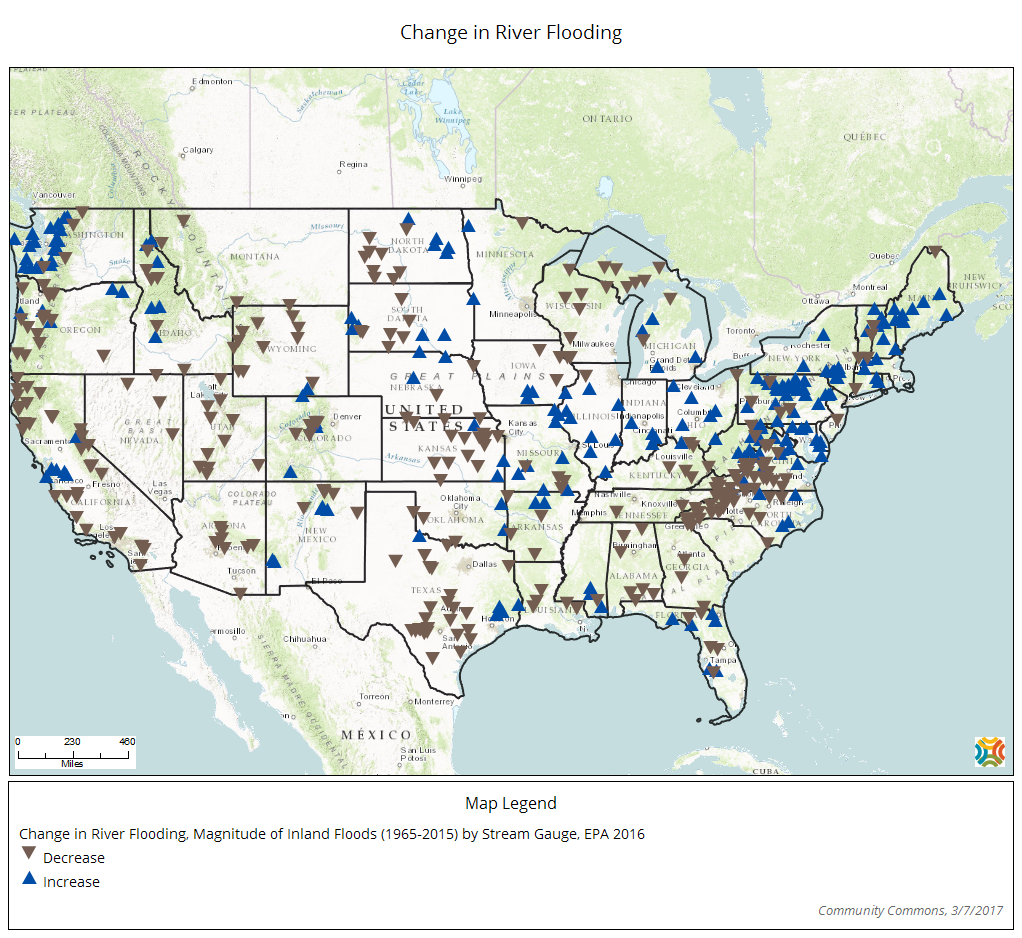 Cardiovascular disease is the leading cause of death in the U.S. and nearly 80 million Americans are affected by hypertension, coronary artery disease, heart attack, and stroke. While a healthy lifestyle can prevent heart disease, an environment with poor air quality and extreme temperatures can compound health issues in people with chronic illnesses like cardiovascular disease.

Drought and increasing temperatures contribute to poor air quality. The dry conditions worsen the effects of wildfires, ground level ozone, pollen, and fine particulate matter in the air. Not only do these conditions put physical stress on those with chronic disease, they also can lead to or worsen lung disease, asthma, and allergies. Take a look at the maps below to see how and where air quality has worsened. 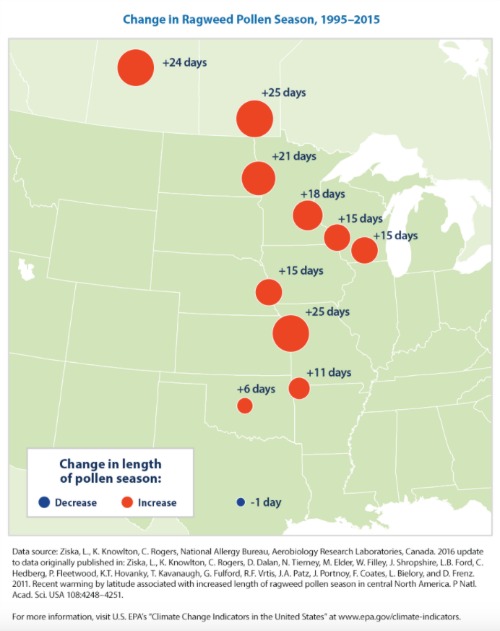 Fine particulate matter, or pollution, is a mixture of microscopic particles and air droplets. These particles are especially harmful as the tiny sizes allows them to travel deep into the lungs and blood stream, potentially causing serious harm to lungs and heart. 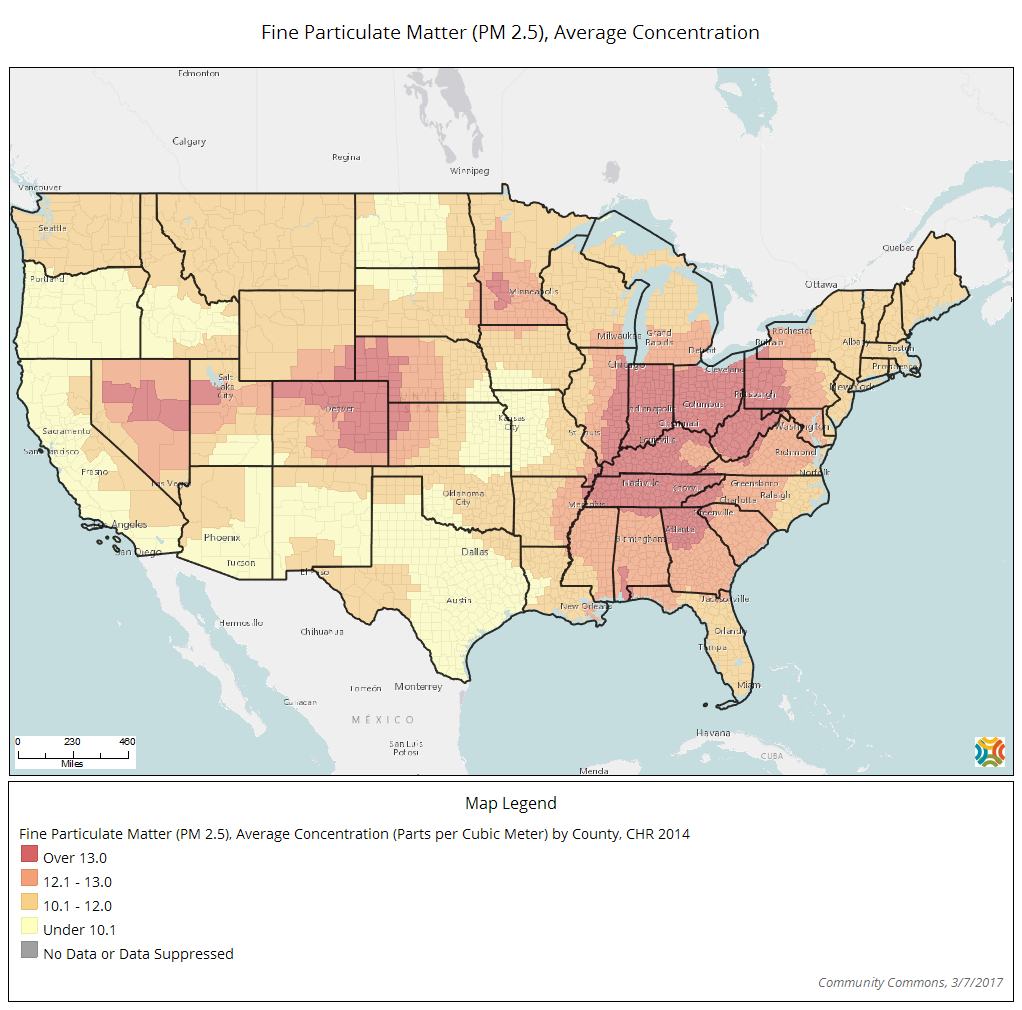 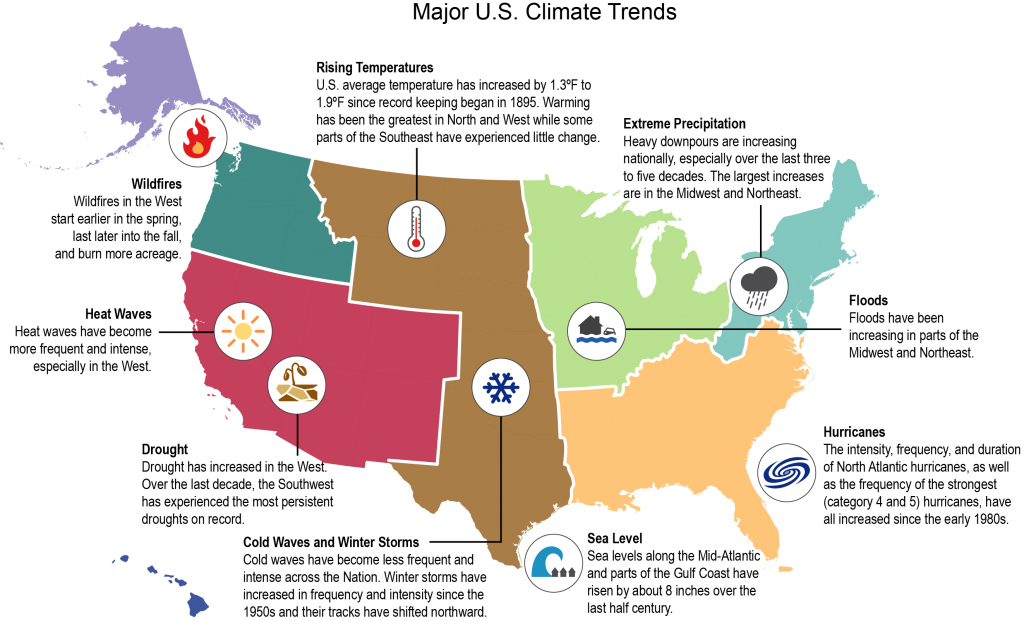 Exposure to hazards and impacts related to climate change varies across different people and communities. The West sees an increase in heat waves and drought severity while other areas in the U.S. are seeing an increase in extreme precipitation.  These trends will vary across the country, as will the impact on health.

Poorer households and communities that lack solid infrastructure, live in a floodplain or are located near industrial sites that burn fossil fuels are much more vulnerable to weather threats and less able to rebound after a disaster. Many of these areas, especially in more rural parts of the country are already burdened by poor health outcomes, like cardiovascular disease and diabetes.

Many tribal communities lack access to safe drinking water and water treatment facilities. What impact will contaminated floodwaters have on their water supply? What do more frequent and extreme heat waves mean for elderly living in non air-conditioned homes? Each region and each state, down to the local level, have different vulnerabilities that make them more susceptible to the impact of climate change.

As recently noted by Alonzo Plough, “The people at greatest risk of serious harm from these climate change-related events include children, the elderly, people with chronic health conditions, the economically marginalized and communities of color.” As public health professionals and communities strategize on how to respond the threat of climate change, it’s important to look at it not only from a population health perspective, but also consider how different populations within the community will be affected, along with their ability to respond and rebound.

The Medical Society Consortium on Climate and Health 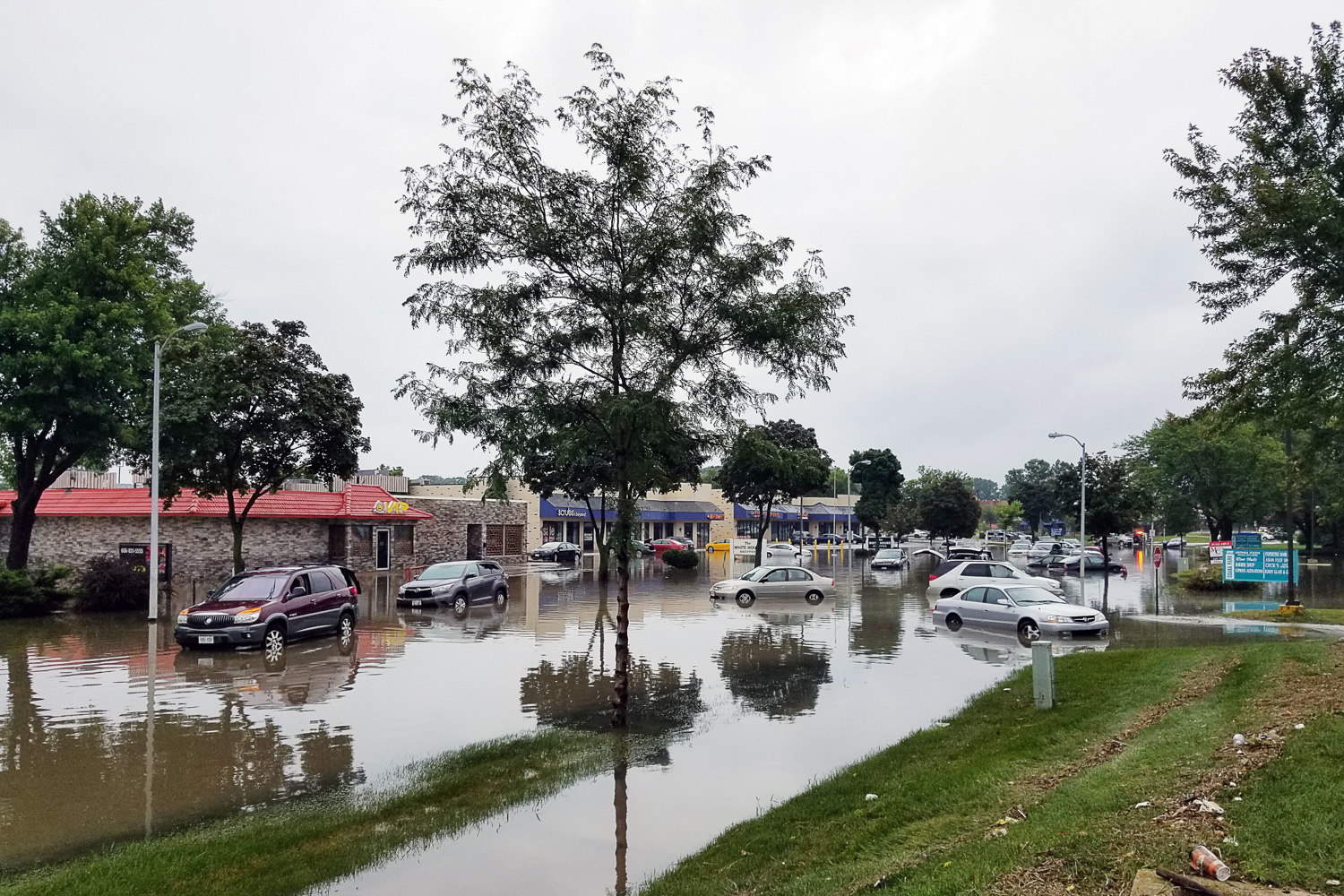