This article was written by Christine Gambino, Education and Social Stratification Branch, United States Census Bureau. It was originally published in Random Samplings on March 30, 2017.

How do the foreign born and their children influence educational attainment statistics?

For the first time in U.S. history, one-third (33.4 percent) of the population aged 25 and older are college graduates with bachelor’s or higher degrees. This is part of a continuing trend toward higher rates of bachelor’s degree and advanced (master’s, professional, and doctoral) degree attainment. However, most people do not know that about one-quarter (25 percent) of the population age 25 and older are either foreign born, or have at least one foreign-born parent. 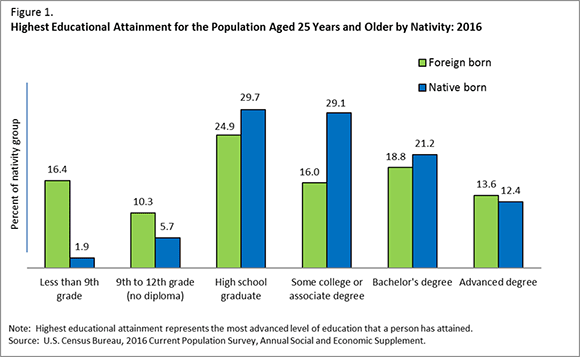 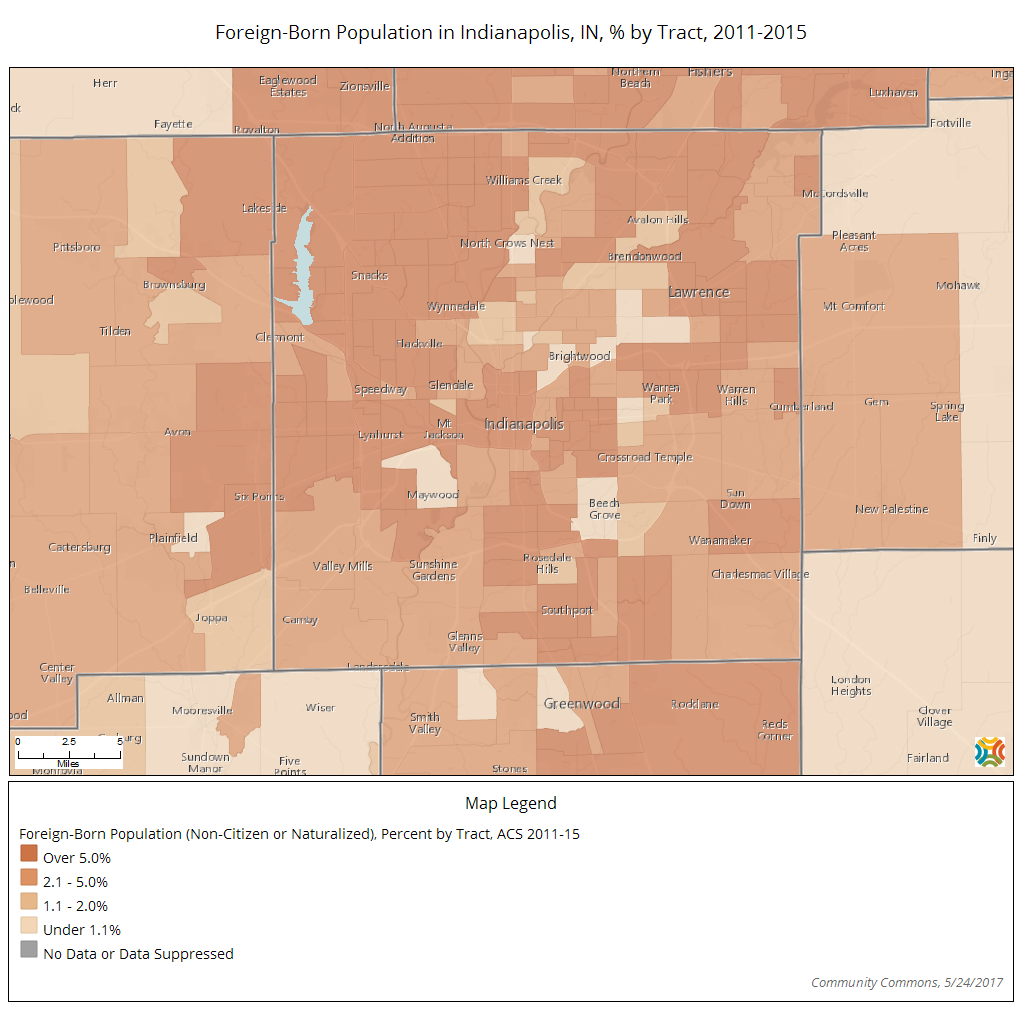 The native born were more likely than the foreign born to have completed some college or to have completed an associate’s degree.  The proportion of native born whose highest level of educational attainment by age 25 was “some college or associate’s degree” was 29 percent, compared to 16 percent of the foreign born. This may be because the foreign born with bachelor’s and advanced degrees have a better chance of being admitted to and staying in the U.S., and may also reflect occupational differences that require different kinds of degrees. The Current Population Survey does not ask whether degrees were attained in the United States or abroad. 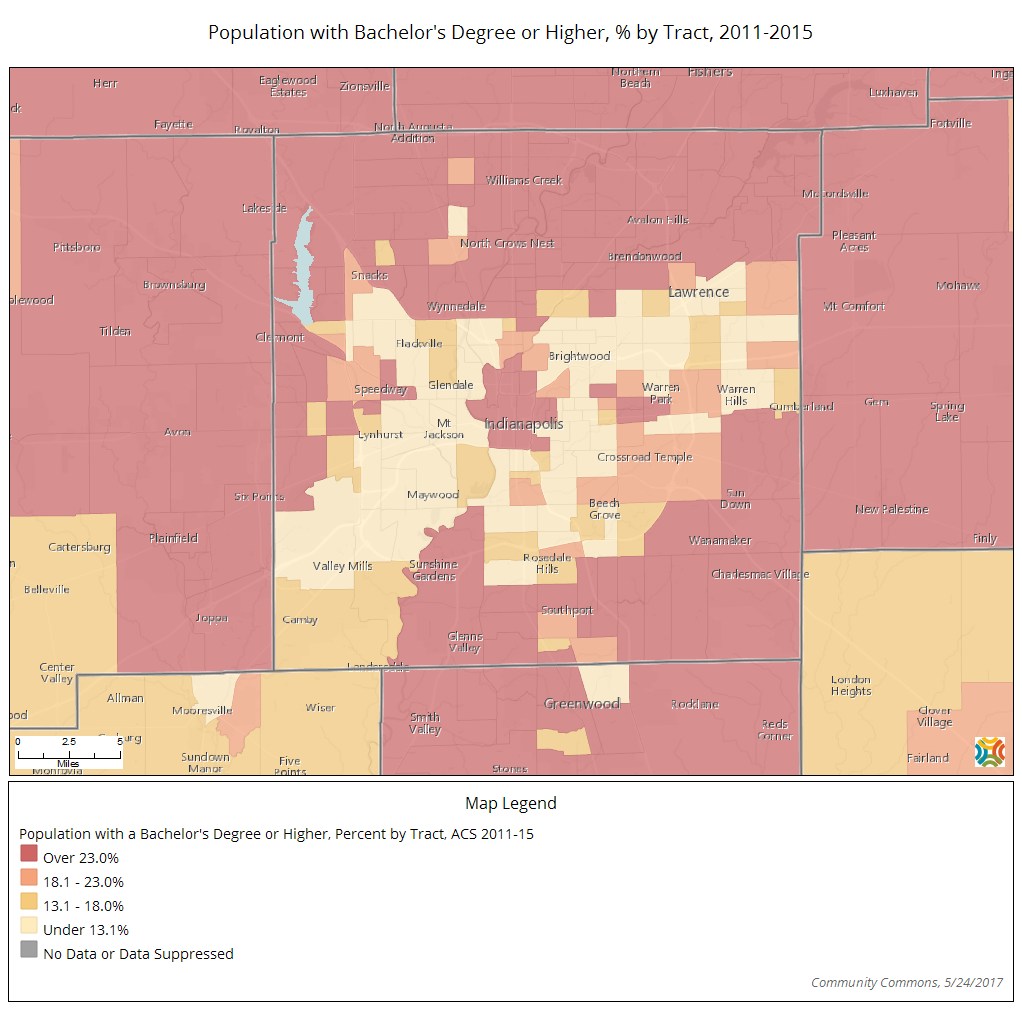 Current Population Survey data shows that over the past decade, the “second-generation” children of immigrants have a higher rate of college completion than the foreign born (first generation), and even higher than the native born with native-born parentage (third-and-higher generation) (Figure 2). 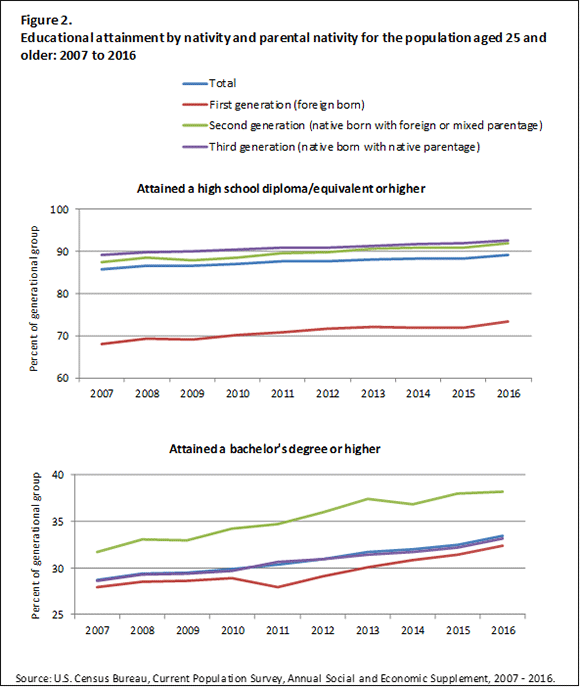 Taking the first and second generations together, their level of high school completion is below that of the native born with native parents. On the other hand, when it comes to bachelor’s and higher degrees, the foreign born and their children, combined, have higher attainment than the rest of the population. To answer the question posed at the outset, the influence of the foreign born and their children is mixed, but definitely positive at the college level.