Developed by Seabourne Consulting, experts in We Are Here: The Faces from Third & Plum, Part 1

We Are Here: The Faces from Third & Plum, Part 1

We believe in the power of storytelling and the importance of investing in the future by sharing those stories – whether they are stories of successful community ventures or lessons learned from stories of things you wish happened just a little bit differently. These are the stories of communities working together for the common good. This article is part of “We Are Here: Housing Insecurity in Cincinnati,” a series produced by Women of Cincy and originally published at womenofcincy.org/housing.

I watched a live stream of City Council taking comments from the community regarding Third and Plum and felt confused. I was at a loss for what to do, how to react. I felt like not everyone was being considered and that we should hear more perspectives from the folks who called the area under Fort Washington Way home. For those of you who aren’t familiar with this story, here’s the nuts and bolts: Close to 40 people experiencing homelessness set up tents under the shelter of Fort Washington Way. The city received complaints from downtown businesses and residents about the encampment and ordered city crews to dismantle it. City Council, in an effort led by Tamaya Dennard, halted the evacuation order to give residents of the encampment more time to relocate and for the city to bring in services in an attempt to serve the population. The camp was dismantled on July 25. Through this whole process, there has been miscommunication, misrepresentation, and just plain old drama. But we’re not here to talk about that.

On Saturday, July 21, Angie and I headed down Third Street. I was nervous. I think we both were, a bit. I wasn’t nervous about my safety; I was nervous that I’d offend someone, that I’d bring up old memories they didn’t want to share. I was nervous that the folks living there would see me as “media” and question my intentions. I mean, I was walking straight into someone’s home, unannounced, uninvited; I expected apprehension.

As we walked in, I was instantly struck by how much the space under the underpass felt like a community. Tents were neatly stacked into two rows lining the walls of the underpass. Each person had their own space, like tiny plots of land. There were bikes, beds, tables, chairs and even a grill.

We were quickly approached by Bison, the mayor of the encampment. Bison introduced himself; we shook hands, and he led us to the other end of the tunnel, away from the living area. Like I’d feared, Bison was a little apprehensive, but he listened intently. He wanted to protect his family, and the media attention the community was receiving was escalating quickly. I started by explaining who we were, fumbling my way through the usual spiel: “We’re Women of Cincy, an online publication and community that tells stories about Cincinnati’s amazing women…” I soon stopped and basically blurted out, “We’re here to tell your story, not our story. We’re here to make sure the world knows you. We’re here to put a face to this. We want to rise above all the bullshit and get to know you.” Bison let down his guard a bit. He agreed to ask fellow residents if they’d speak with us. Two folks agreed to speak on the record: Momma and Eddie.

While we were chatting, a man brought over chairs, referencing his upbringing in the South and extending southern hospitality. He sat down three chairs and walked back to his site. Eddie, an older man with an easy smile, walked over and sat down next to me. Eddie was born and raised in South Carolina. As I promised Bison, this is Eddie’s story, in Eddie’s own words: 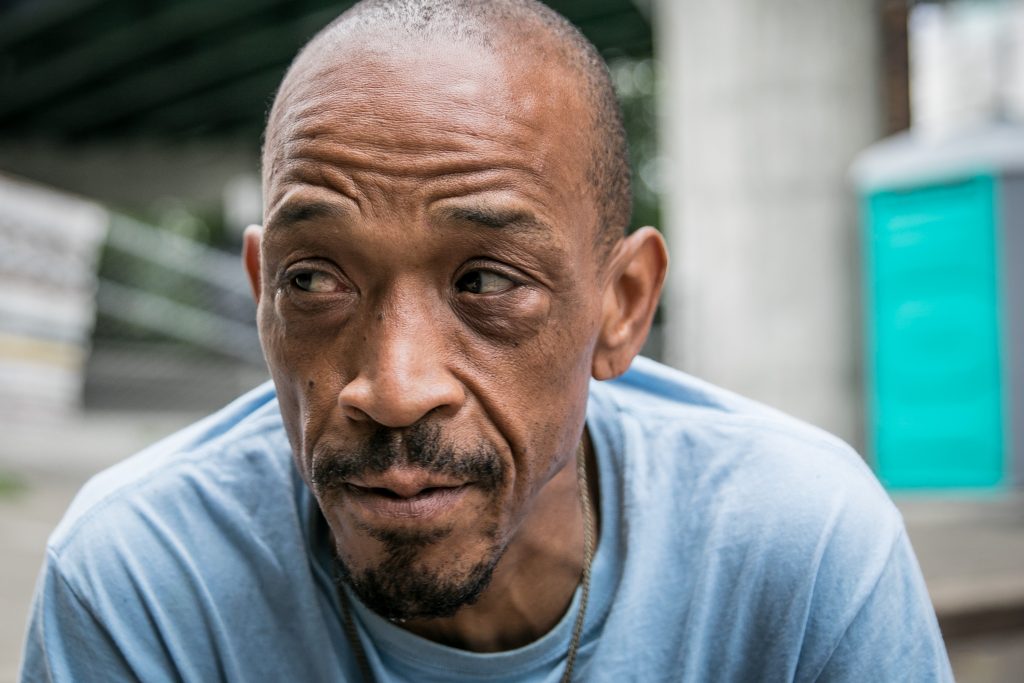