Developed by Seabourne Consulting, experts in Who are Veterans?

The U.S. veteran population totals 19 million men and women living in the United States and Puerto Rico who have served on active duty in the U.S. Army, Navy, Air Force, Marine Corps or Coast Guard. These veterans served for different lengths of time and during different wartime and peacetime periods. They entered the military at different ages and came from different backgrounds. Some were drafted, while others volunteered.

Their differences make each veteran unique and influence the size and overall characteristics of veterans as a group. So, who are veterans? Understanding the population we call “veterans” requires some basics in military history and policies.

To start, we can think of veterans as two main cohorts — “draft era” and “All Volunteer Force” (AVF). Draft-era veterans are mainly those veterans who served in the military during the Vietnam era, Korean War or World War II. Forty-three years ago, in 1973, the draft ended and the AVF began. The draft-era military was substantially larger than today’s AVF.

Figure 2 shows the impact of the draft-era military on the composition of both the veteran and nonveteran populations. Because such a high proportion of men were drafted into the military during World War II, the Korean War and the Vietnam era, older nonveterans are predominately women.

The disparate sizes of the draft era and AVF military also affected the proportion of men who were veterans over time. By 2000, for example, most men who were old enough to have served in the Korean War and World War II were age 65 or older while those who were old enough to have joined the military since the start of the AVF were under the age of 45. In that year, about two out of three men age 65 or older were veterans compared with about one out of ten men under the age of 45. Over the past 15 years, those percentages have decreased as the draft-era cohort declines due to deaths and the AVF cohort nears age 65. In 2015, about 43 percent of men age 65 and older and 5 percent of men under the age of 45 were veterans.

Military policies and enlistment requirements over time have also had an effect on the characteristics of veterans. Take four characteristics in particular: sex, race, citizenship and education. Figure 2 highlighted a unique aspect of the veteran population that sets it apart from the nonveteran population, the ratio of men to women. Less than 10 percent of veterans are women. In comparison, over half of nonveterans are women (Figure 3).

Women did not become a permanent part of the U.S. military [PDF 4.8 MB] until 1948. Between the early 1940s and mid-1970s, women were restricted to less than 2 percent of the military population. Since the advent of the AVF, women have joined the military in greater numbers and now make up a larger proportion of their veteran cohort than their predecessors. In 2015, 15.3 percent of AVF veterans were women, compared with 3.4 percent of draft-era veterans. The proportion of women in the total veteran population will continue increasing over the next several decades as the size of the draft-era cohort and the veteran population as a whole decline.

Another aspect of the military that makes the veteran population unique is citizenship. While most members of the U.S. armed forces are citizens, citizenship is not a requirement for military enlistment. Special provisions of the Immigration and Nationality Act have made it possible for those enlisted in the military to obtain U.S. citizenship. In 2015, less than one percent of the veteran population were not citizens, compared with 9 percent of nonveteran adults (Figure 3).

A final example of how military requirements shape the veteran population is education. Each service branch has their own requirements for enlisted personnel, but, with few exceptions, they require a high school diploma. Therefore, veterans are generally more educated than nonveterans. Nearly 94 percent of veterans have a high school diploma or more as their highest level of education, compared with 86.4 percent of nonveterans (Figure 3). The majority of veterans have at least some college education, if not a completed degree. 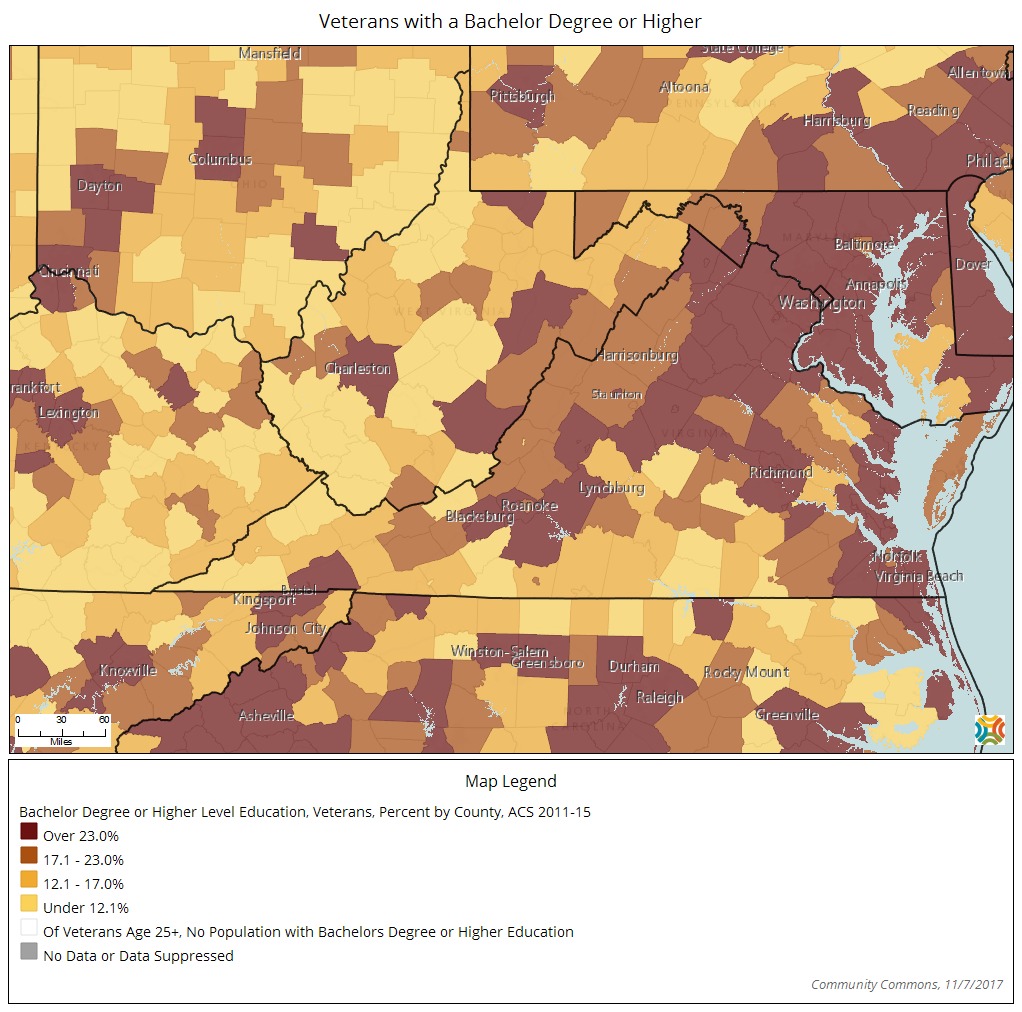